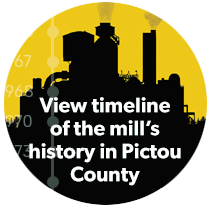 A challenge common to rural communities the world over is taking place in Pictou County, Nova Scotia where there is sharp division over the fate of the local pulp mill.

To correct a historic injustice the mill must, by law, stop flowing pulp effluent into the tidal lagoon next to the Mi’kmaq community of Pictou Landing. To keep operating the mill has proposed a controversial plan to redirect its effluent into the environmentally sensitive fishing grounds of the Northumberland Strait. Fishermen say “No Pipe”. The mill says “No Pipe No Mill”. A line has been drawn and with jobs at stake the issue has reached a boiling point.

The Mill is an observational documentary focused on average citizens on all sides of the debate standing up to what they perceive is a threat to their livelihoods and way of life. While the mill has been the subject of heated debate over the fifty years of its existence the insistent force of the global environmental crisis and greater sensitivity to indigenous rights and reconciliation has upended the long established attitude that the jobs the mill provides offsets the pollution it creates. Now a coalition of indigenous and non-indigenous fishermen is in confrontation with the province’s forest industry. For a tightly knit community reliant on fishing and forestry the hardening position drawn between fishermen and the mill has divided families, neighbours and businesses.

For a tightly knit community reliant on fishing and forestry the hardening position drawn between fishermen and the mill has divided families, neighbours and businesses.

The Mill takes place over a year from the time the plan for an effluent pipe was announced in 2017 to March 2019 as government makes its initial assessment whether to approve the project or not. As opposition to the pipe mounts, there is a growing sense the future of Pictou County for better or worse is tied to the fate of the pulp mill. As an investor in the mill as well as the regulator responsible for its effluent, the government of Nova Scotia presides over a Gordian knot of its own making: if it allows the mill to continue operating it will break its promise to the people of Pictou Landing and threaten the lucrative lobster fishery indigenous and non-indigenous fishers depend on. If it closes the mill, the entire forest sector of the province will be disrupted and hundreds if not more jobs will be lost.

The Mill is a distinctly Canadian story that reflects a global dilemma facing rural communities that bear the brunt of the environmental and economic fallout of increasingly unsustainable resource industries. It gives voice to indigenous and non-indigenous fishermen, forestry workers and community leaders, deeply rooted in the land and waters of their area, who struggle to influence decisions that will ultimately be made by government and the foreign corporate owners of the mill. Cinematically capturing the rough beauty of the landscape and the unpretentious eloquence of the people that depend on it, The Mill is both a loving tribute to Pictou County and an illuminating portrait of a small community dealing with profound historic change.